The use of intent scale transactions to predict purchase interest

The use of intent scale transactions to predict purchase interest

December 19, 2008 ~ Market researchers commonly use a mathematical technique called intent scale translations to convert a respondent’s stated purchase intentions into actual purchase probabilities. Intent scale translations provide the researcher with an estimate of actual buying behavior and accounts for over estimation on the part of respondents’ participation in the research. Companies can then rely on purchase intentions to forecast the purchase of new products or repeat purchase of existing products. In other words, if a customer states that he/she prefers a particular product over another, what is the probability that he will actually follow through with making the purchase of the preferred product?

Studies have shown that consumer’s self-reported intentions to purchase do not reliably predict their purchasing behavior (1). Market researchers needed to develop a method to more accurately translate a respondent’s response to survey questions into actual probabilities that they would buy or use a product of interest. Intent scale translations take data from a customer survey on purchase intentions and convert the data into a prediction of purchase probability by using comparisons of stated vs. actual purchase behavior.

Traditional intention rating scales use a 5-point scale to show consumer’s intentions of buying a product. In this traditional method, people who scored a rating of 1 or 2 were typically assigned a 0% chance of buying the product. The research of Thomas Juster (2)found that the 5-point scale was an inaccurate way of measuring buyer intention and that a buyer with a score of 1 and 2 actually had a greater than 0% chance of buying the product. Juster created his own buyer intention scale that would improve a marketer’s ability to forecast behavior from intentions and account for changes in a consumer’s true intentions between the time surveyed and the time of actual purchase. Juster developed an intention scale that adjusted the intention scores by analyzing the actual future purchase behavior of consumers after being surveyed. He developed a new 11-point scale which implied simple methods for calculating intentions. It stated that if a sample group was asked if they would buy a new car in the next month and they were to choose a number correlating to the likelihood on a scale of 0 to 10, 10 being the greatest possibility, and the average score came out to be 2.5 out of 10 then that would translate to 25% of the general population purchasing a new car in the next year. The research described here will provide a demonstration of how purchase intention scales are used to predict actual consumer purchase behavior.

The traditional 5-point scale is used to give a general estimate on consumer’s purchase intentions of something. It can be used to predict everything from consumer’s intention on buying a certain product to predicting where people may travel for vacation or even the likelihood of a doctor ordering a particular diagnostic test for a patient. The 5 point scale is routinely used across many types of businesses and industries. Below is a typical scale and description of a 5 point Intention Scale. 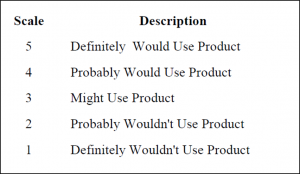 The 5-point scale, also referred to as the Likert scale, is still commonly used by major corporations to understand consumer’s product purchasing intentions or simply conducting basic surveys. It is especially useful in telephone surveys and mall research where consumers are taking a verbal survey and their responses are being recorded by the researcher.

One major corporation that still uses this 5-point scale is AC Nielsen, a marketing research company that conducts surveys on a variety of consumer products. AC Nielsen provides a service called BASES to present pre-market insights to consumer goods companies. Consumer good manufacturers often use outside market researchers for conducting unbiased surveys. BASES has become the industry standard forecasting model. Table 2 demonstrates how a 5-point scale is translated into purchase probability. Note that Intent Probability overestimates predicted probability when comparing to the AC Nielsen BASES translation scale (3). AC Nielsen and others have conducted diary studies where consumers record their actions for the researcher over time and follow-up market research to measure actual observed purchase behavior compared to stated intentions. This has resulted in establishing a correction factor that adjusts the intent probabilities of purchase.

As previously mentioned, another common purchase intention scale used is the 11-point scale, created by Thomas Juster, which he found to be much more accurate than the 5-point scale. On the Juster scale, every description correlates directly to a number ranking of 0 to 10. The reason for this alternative scale is to give higher values to people ranking lower scores. In the 5-point scale, someone who receives a score of 1or 2 were sometimes assigned a 0% chance of using the product. Juster found this to be incorrect and set out to fix it by coming up with his own scale. In the 11-point scale in Table 3, the score relates directly to the probability of use. For example, someone with a score of 4 is found to have a 40% chance of using the product. 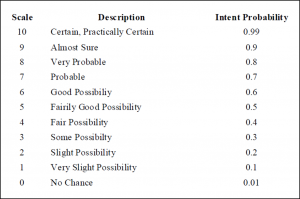 Herein we report a review of consumer studies as it relates to a Translated Probability Intent Scale. What I found was a research study on Fast-Moving Consumer Goods. This particular study observed three popular types of soups and four types of yogurt. It involved a face-to-face survey performed by the Palmerston North Household Omnibus survey (4). The consumers were asked about their purchase intent of each of the items and an overall percentage of purchase probability was obtained. Then the respondents were re-interviewed by telephone a month after the original survey and estimates of actual purchase intent were obtained. For example, Fresh and Fruity yogurt had a predicted purchase rate of 36.2%, but when the respondents were re-contacted, only 22.6% had actually purchased the Fresh & Fruity yogurt. This indicates an overestimation of expected purchase intent by13.6%. Table 4 shows the results from this survey for various products.

We plotted all of the actual and predicted probabilities on a scatter plot with Predicted Purchase Intent on the X-axis and Actual Purchase Behavior on the Y-axis. In Figure 1 the graph and equations generated from the 11-point Juster scale results are shown. 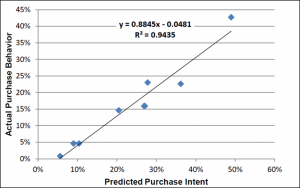 We took the Juster Scale Intent Probability numbers in Table 3 and entered into them into the regression equation, y = 0.8845x – 0.0481 (x= 0.99, 0.9, 0.8, etc). These represent the predicted purchase probabilities “x” in the equation. The decimals are then converted back into percentages for the final Translated Probability Table 5 below:

1. Sheppard, Blair H., Jon Hartwick, and Paul R. Warshaw. “The Theory of Reasoned Action: A Meta-analysis of Past Research with Recommendations for Modifications and Future Research.” Journal of Consumer Research 15.3 (1988); 325-343.